I met Don when he dropped in on a workshop I was taking in 1964 with Minor White.

He had just started photographing for Sunset magazine then. Don was a dear friend, almost a brother. We had in common that both of our fathers died in accidents when we were not yet 2 years old. Don’s father in a logging accident near Sedrow Wooley WA, where Don’s family lived in a small community which his grandfather had named Hoogdal after his home town in Sweden, my father in an aircraft accident (bush pilot in Alaska, died in 1944). Everybody loved Don, and everybody – that includes me. I worked for him in his darkroom, and worked with him as a colleague as a Sunset freelancer.

Don was just a really great photographer. A few people knew this. Don was, of all the photographers working for the magazine, the one who had probably more photographs in print than any of us. The magazine was then really a great picture magazine, albeit one that dealt with subjects that aren’t exactly glamorous, and Don was at the top. When Sunset was sold to Time Warner, none of us (well, maybe except one or two) ever got any more calls. Don had figured that his ample collection of four-drawer filing cabinets full of Sunset imagery would keep him busy and keep the money coming in, but that wasn’t happening. So, he went back to his 1949 images, when he found and worked in Chavez Ravine, photographing the community. The work that he had done at nineteen years old as a student at Art Center, the shows he had of that work, and theÂ  book that came from it made him famous.

I can’t get WordPress just to accept a link. The link to the L.A. Times obituary is at the top. Until I can figure this out, you’ll have to copy and paste it.

I’m limited (for now) to using the camera in one hand and the flash in the other, because I don’t trust the strobe’s trigger voltage; if it’s too high, it could damage the camera. I open the shutter on “B”, then fire the strobe, then close the shutter.

I’m waiting for a part. When it comes, I will be able to work with real victims. As it is, I’m sort of stuck with myself as a subject, and Jane when she’s willing to put up with it. I made a special camera to photograph the interior of the Rotunda of the Washington State Capitol. It’s a magnificent space. Conventional imaging can’t possibly do justice to the amazing volume it encloses. This view includes from just below the horizon to dead vertical; the zenith. It’s more distorted than it looks.

This image was made prior to the Nisqually earthquake (2001). This is me. I need a subject to practice on, and I’m handy. It is hard to get very far away; arm’s length. Actually, I like these tight cropped portraits with a dash of uncertainty.

After working in photography for about ten years, in the mid 1970’s, I decided that my experience with the medium could not be considered complete unless I explored the simplest possible camera, the pinhole camera. That began a long fascination. The forthcoming exhibit as described below represents, for myself, a sort of grand culmination.

The image at the top of this press release is one of mine. It was used as the cover image on the first edition of Eric Renner’s book Pinhole Photography: ….

I joined many of my colleagues from all over the world for the opening in Santa Fe on April 26 and 27. It was great to meet many people whose work I’ve been seeing and enjoying for about thirty years.

note: links indicated below don’t work. you will find them at the end, in order as given in the text. 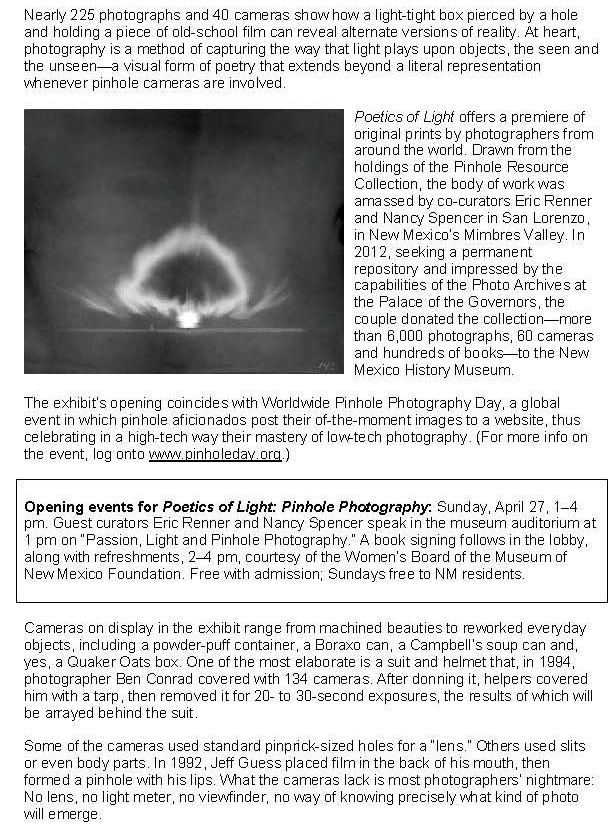 
I’ve made a pinhole specifically for shooting portraits with the NEX. It’s equivalent focal length is 55mm, which gives it a perspective similar to an 85mm lens on a 35mm camera. Here’s Jane, in one of a test series. Using electronic flash at f/180 or so is a challenge, since I want a nice light quality.

It seems to me that that the pinhole image is a really useful portrait medium because it suppresses detail but retains the essence.